Now, organizing my stash has been tedious at times.  Some of my wool was in tough shape.  When I moved a few years back I stored my stash in boxes without benefit of moth or moisture protection and much of it suffered when it didn’t get unpacked for the first couple of years.  Over time, I have moth balled, steamed, skeined and soaked about half of this yarn.  Even non-wool items couldn’t join my studio stash until they had been thoroughly treated to prevent the mildew smell from spreading.

Even Lil One recently joined in on the effort, and a couple of weeks ago witnessed her Mom laboring over a beloved but bedraggled skein of gold Harrisville Shetland yarn.  She loves yarn, so she offered to spin the swift… before getting distracted by bubble blowing duties 😉 . 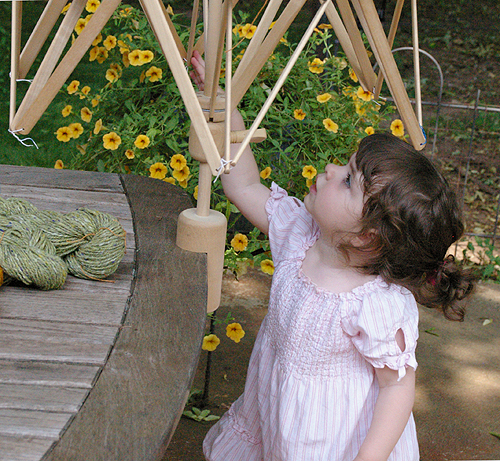 I began trying to skein this wool yarn only to realize my “golden treasure” was in many pieces (about 25-30 ish).  I thought, “Oh no!  What now?”  I had a yarn fantasy all set – the triple strand knit, the sophisticated sideways glances as I walked along through crisp fall leaves in my elegant little snood.  Well, I’d just have to “make it work”!  I began felting the pieces back together, and carefully winding them onto my swift yard by yard…  Several hours later, and a “How much could it cost for a new skein?” from an “outsider”, I had re-assembled the skein.  I know, slightly insane, but I can’t bear to give up on my favorite stashed yarns!  Here is the pile midway through:

So, this was all for a “use up some old stash” project.  I have a whole lotta yarn to knit up to trim my fat stash back down to size, so a multi-strand invention seemed just the ticket.  I was inspired by Yarnia and Fig Knits blog week post involving mohair, to combine this “rescue yarn” with two other leftovers, Stacy Charles “Ritratto” and a Hand-Dyed 2/14 Alpaca-Silk  from Valley Yarns (Webs).  Here they are separately:

And here is the resulting mixed yarn ball:

And then, after all that, I was able to knit up my Eyelet Cowl with what amounts to a worsted weight yarn.  It was kind of magical how several small amounts became a couple of nice healthy balls of yarn.  I found the Cathy Carron pattern pretty straight forward, but I modified it a little by adding two extra knit rounds to each repeat.  It knit up springy and wonderful, and the resulting fabric has a real Victorian feel to it.  I finished it off with a nice velvet ribbon rather than the i-cord to really up the vintage feel.  Ta-dah!!

I know, where’s the modeled photo?  Well, this is a super cozy winter knit.  Please!  You could not pay me to pretend it’s cold in this August heat!  I promise to show it off properly when the weather turns cool again.

So, this was a little crazy, even for me.  In the end, I love it even more because it was so involved.

What lengths have you gone to for a lovely yarn?

All content in my blog is part of my creative and artistic efforts. Please ask before borrowing content, usually I am happy to share. In general, content, including photos, patterns and written material: Copyright 2012, Crystal Guistinello, all rights reserved. Furthermore, patterns are for personal use only and you may not edit, publish, copy or commercially exploit the patterns in any way.